Posted on April 12, 2017 by Red Javelin in Crisis Communications 0 Comments 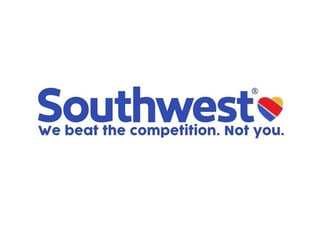 In today’s real-time world of social media and with critics everywhere, reputation management matters more than ever and it can be lost in an instant. By now, most of you have heard about how a passenger was forcibly dragged off a plane when he was bumped from a flight. If you missed it, watch this video here. It has gone viral in the worst possible way for United.  Even United's competitors are taking advantage of its  pr crisis.

United's policy says the airline can select passengers to bump to a later flight based on a priority system that can take into account how much passengers paid, how often they fly, whether missing that flight could affect a connecting flight and how early they checked in for their flight. People with disabilities and unaccompanied minors are generally the last to be bumped. 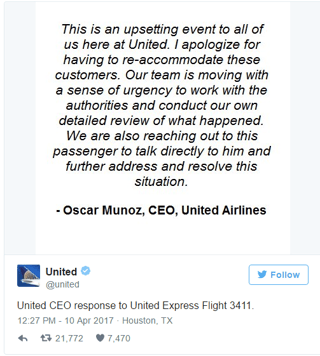 Here is what Munoz should have done immediately when this incident happened.

Too little, too late?

It was only after the stock tanked that Munoz released an apology. The statement reads:

The truly horrific event that occurred on this flight has elicited many responses from all of us: outrage, anger, disappointment. I share all of those sentiments, and one above all: my deepest apologies for what happened. Like you, I continue to be disturbed by what happened on this flight and I deeply apologize to the customer forcibly removed and to all the customers aboard. No one should ever be mistreated this way.

I want you to know that we take full responsibility and we will work to make it right.

It's never too late to do the right thing. I have committed to our customers and our employees that we are going to fix what's broken so this never happens again. This will include a thorough review of crew movement, our policies for incentivizing volunteers in these situations, how we handle oversold situations and an examination of how we partner with airport authorities and local law enforcement. We'll communicate the results of our review by April 30th.

I promise you we will do better.

Although the stock bounced back a bit after the statement was released, the damage this incident has caused to United's reputation may be irreversible, at least for some consumers. The question remains, will Munoz remain at the helm of United or will this debacle cost him his job?

The timing of the apology indicates that the company did not have a solid pr crisis  plan in place. All companies, regardless of size or market need to have a clear and concise crisis communications plan that can be activated immediately.

Here are three tips on how to handle a burgeoning crisis.

Need help putting a crisis communication plan in place? Sign up for a free assessment below. 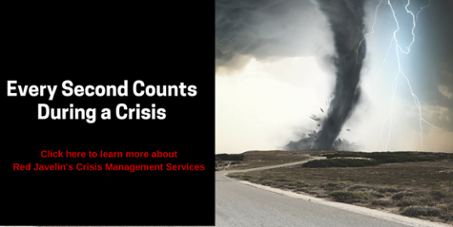 How to Use Social Media During a Crisis