Posted on April 09, 2015 by Dana Harris in Public Relations 0 Comments

This week’s breaking news about the fatal shooting of an unarmed African-American man by a South Carolina police officer immediately concerned me. How will the public react? Will it be another Ferguson situation? 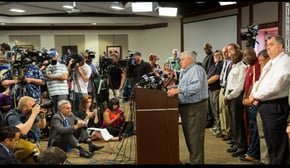 As a communications professional, I watched the story unfold and was pleasantly surprised with how the police chief and other public officials were handling the situation. It displayed many of the strategies I advise my publicly-held clients when employing crisis communications.

So what are we learning from the stories that unfold before our eyes that we can bring to our own businesses?

In today’s real-time world of social media and with critics everywhere, reputation management matters more than ever and it can be lost in an instant. So what should you do to prepare for a disaster that may arise within your own company?  Here's three guidelines you MUST employ during a crisis or event that may hurt your company’s reputation or business:

Companies with successful and well-executed crisis communications plans and policies and are proactive, transparent and accountable will help keep their business in the driver's seat during a crisis, squash rumors and minimize the damage that can result to a company’s reputation.